It includes system and component demonstration and plant growth experimentation and is led by DLR’s Antarctic ‘gardener’ Paul Zabel.

On March 21, the strongest storm to reach the Antarctic region in over a year occurred, with wind speed above 70 knots and with gusts up to 84 knots.

The lowest temperature recorded during mission phase is -38.3 °C.

Paul Zabel’s daily activities include on-site, routine operations such as, seeding, harvesting, harvest processing, nutrient solution preparation, maintenance of facility and subsystems, as well as for the monitoring and repairing of off nominal events. 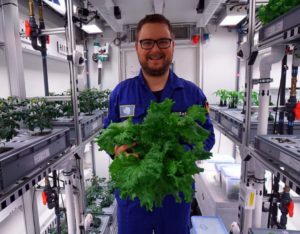 There have been over 120 harvests which have yielded:

Some off nominal events have been reported, which are inevitable during such missions. Some have included problems with the system equipment, such as a leak in one of the thermal system cooling loops, and a failed fan unit. Other problems have arisen, due to the extreme environment of Antarctica and its freezing temperatures, including increased activation time for heating elements, and minor damage to some external elements of the MTF during a storm.

Fortunately, all small failures have been repaired or replaced, and the MTF remains fully functional! Paul Zabel will remain in Antarctica over the wintering season to operate EDEN ISS. He is currently one of a ten-person crew on-board the Neumayer Station III.

Image: Paul Zabel in the FEG during a harvest. Credit: DLR, 2018