The most recent press conference at DLR took place in Bremen 23 August 2019.

It was followed by a European wide news coverage such as

Results of EDEN ISS in a nutshell

Voices from the press conference

“Future, long-term crewed space missions will require locally grown food. EDEN ISS has proven the feasibility of a space greenhouse in the Antarctic and thus demonstrated that this technology could also be used to produce food on the Moon and Mars,” says Hansjörg Dittus, DLR Executive Board Member for Space Research and Technology. “The space greenhouse concept now being presented is a valuable foundation on which we wish to develop further research work.

“Overall, we have produced 268 kilograms of food in an area of only 12.5 square metres over 9.5 months, including 67 kilograms of cucumbers, 117 kilograms of lettuce and 50 kilograms of tomatoes,” says Zabel. “The taste and smell of fresh vegetables have left a lasting impression on the overwintering crew, and have clearly had a positive effect on the team’s mood over the long period of isolation.” This correlation is also being researched from a psychological perspective.

“The data we acquire there is primarily about global climate changes as well as the biodiversity of the Antarctic region. The greenhouse is an outstanding example of how we can also conduct research into other important forward-looking issues at the Neumayer III station. After all, the ability to explore regions that are hostile to human life brings us closer to human spaceflight. At the same time, the steady supply of fresh fruit and vegetables has once again had a very positive secondary effect on our overwintering crew,” says Antje Boetius, Director of the Alfred Wegener Institute.

Zabel needed an average of three to four hours per day to grow the plants. “The operation and maintenance of the greenhouse technology occupied about two-thirds of the time. The remaining third was needed for sowing, harvesting and plant care. For a future space greenhouse, the workload must be significantly reduced to save the valuable time of the astronauts.”

“This step was used to test another spaceflight scenario in which a potential greenhouse arrives before the astronauts and operations are initiated by remote control,” Schubert says. “The test run was a complete success. Now, the current AWI overwintering crew is continuing the operation of the greenhouse, with strong support from the control centre in Bremen, where we monitor as much as possible from a distance. The procedures developed last year are currently proving their worth in minimising the crew’s workload and keeping the processes as simple as possible.” 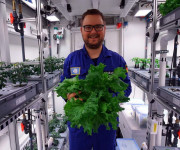