The EDEN ISS partners met for a design workshop from September 07th to September 18th 2015 in the Concurrent Engineering Facility (CEF) of DLR’s Institute of Space Systems. The purpose of the workshop was the generation of a preliminary design for the mobile test facility. The mobile test facility will be built later in the project and used to conduct a  12+ month long experiment campaign beginning in December 2017 at the German Neumayer Station III in Antarctica.

During the two week workshop, the consortium members worked on their respective subsystems and on how their systems can be integrated in the overall greenhouse. The design of each subsystem was greatly improved. System budgets (e.g. mass, power) were calculated, CAD drawings made and estimates with respect to inputs and outputs conducted. A very important step was the consolidation of the system and subsystem requirements. 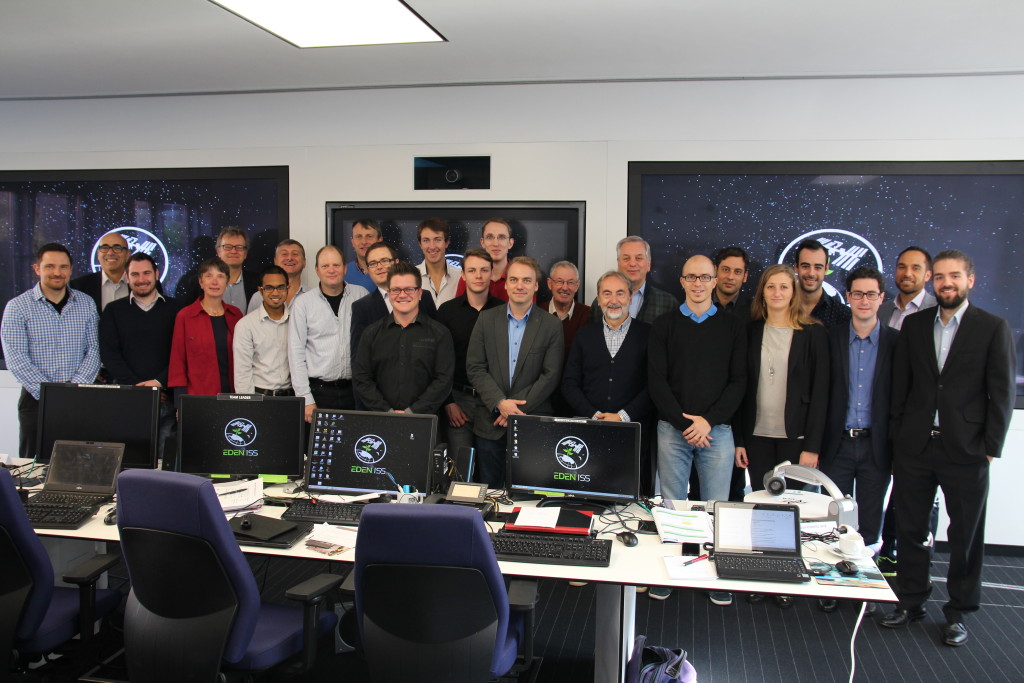 It was the first time that the whole team worked together at the same location. Each participant was responsible for a specific subsystem (e.g. the plant illumination subsystem, the atmosphere management) or had a specific role (e.g. horticulture expert, systems engineering) in the workshop. In several splinter meetings a small group of experts sat together to discuss a specific problem (e.g. the optimization of the spacing between different plants). During so called system rounds, the participants presented the work they have done and the decisions which were made to the whole team. The two team leaders and the system engineer were responsible for keeping track of the progress.

The workshop team was supported by an architect who advised the team regarding ergonomics and human factors, because it is very important that the mobile test facility is designed in a way that two persons can move and work effectively. The architect also generated some images how the mobile test facility could look like from the outside and inside.

ARTIST IMPRESSIONS OF THE EDEN ISS MOBILE TEST FACILITY BASED ON THE RESULTS OF THE CONCURRENT ENGINEERING STUDY FROM SEPTEMBER 2015.

The results of the workshop will be documented in the official deliverable ‘Preliminary Design Report’ which will be made available for download in our publication section within the next two months.

During the next months the EDEN ISS team will refine the design of each subsystem and the complete facility. In March 2016 the consortium will meet again for the Critical Design Review at DLR’s Institute of Space Systems in Bremen. The Critical Design Review is an important milestone of the EDEN ISS project and will mark the end of the design phase and the beginning of the hardware development phase.

At this point, we would like to thank again all workshop participants for their hard work during the two weeks in Bremen. A series of selected photos of the workshop is available in our gallery section [insert link].